No Apple, A Pipe

(17 k)
Drop this cute little extension dingleberry by Rev. Numens Remissionis into your system folder, and the dull Apple in the upper left hand corner of your screen's menu bar will be turned into a holy Smoking Pipe. Not only HARMLESS -- it works on ALL Macs -- but this simple doohickey has turned out to be one of the most USEFUL of all SubGenius Macintosh computer creations. It's the perfect CRASH DETECTOR. You know how, sometimes, you can't quite tell if things have just slowed down, or if your gear has crashed totally? And you waste valuable minutes wondering? Well, this little booger is the most DEPENDABLE guage. If the smoke stops rising from the Pipe, you're crashed. No joke -- many users over a 3 year period have raved about the handiness of the NO APPLE, A PIPE extension. PRAISE DAMN GOD "BOB" and NUMENS REMISSIONIS.

(231K)
We don't know WHO the hell did this QuickTime wonder...when you see it you'll know why. Complete with super-duper Kali-icious morphing action!!!

(Now only 446k!!)
Have hours of meditative fun with this handy-dandy self excremeditation device by Doktor John Zero, complete with a soundtrack by Rev. Ivan Stang and Rev. Mark Mothersbaugh.
If you're on a PC instead of a Mac, try this non-compressed .mov version (flattened QuickTime). (Takes longer at 858k.)

Again, we proudly announce our acquisition of

Rev. Carr (aka smurfboy@aol.com) has made himself infamous throughout the Macintosh-using world for his UTTERLY BLASPHEMOUS, DISRESPECTFUL, SICK, OBSCENE and BLOODY GAMES. It is with great honor (and his permission) that we present these works of heresy to YOU the DUES-PAYING SUBGENII (hint), FOR FREE.

BOISE,ID -- Jan 15, 1996 -- Vowing to "put the fun back in abortion" Lamprey Systems President-For-Life Robert Carr announced the release of Lamprey Systems latest game, Operation Rescue.
Furthermore Carr stated, "This game will help to strengthen the moral fiber of America and reinforce the family values such as cannibalism, child abuse and senseless violence which made this country great."

After pausing to exchange gunfire with protesters outside of Lamprey Systems Headquarters Carr continued, "Operation Rescue also teaches the importance of recycling. To you a fetus might be an unviable tissue mass or a potential human life, but down at Newt & Ralph's Abortion Depot it's all protein."

OPERATION RESCUE SPECIFICATIONS
System Requirements: Apple Macintosh with color or greyscale monitor, 68030 processor or better, 1 meg of RAM. Power Macintosh compatible.
Space Requirements: 540 K.
Persons interested in Operation Rescue should send an e-mail to smurfboy@aol.com or lamprey@micron.net
If you are unable to receive files at your InterNet address, Operation Rescue is available on Private Idaho BBS (208-338-9227). 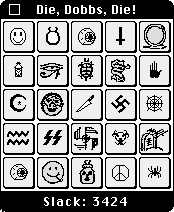 (165k)
Once again, the player VAINLY tries to snuff his or her Short Duration Personal Savior... but he keeps hiding behind one evil mystic symbol after another! Simple but effective.

(99k)
Drop it in your System folder, in Start-up Items. Dobbs will greet you with an inspirational message when you boot up.

(1.4 mb)
The classic that they tried to burn. FINALLY, a Jesus with PERSONALITY is here to answer your every question... heh-heh-heh. AMAZING artificial intelligence dialog will have you CONVINCED that this Sleazy Jesus is really responding to your insults, prayers, snide SubGenius comments, lovelife complaints, etc. Many hidden features. You can even customize his sloppy, bleary-eyed appearance.

(1.1 mb)
Shoot down the Xian and Mormon souls before they make Heaven -- they plunge to Hell as little devils. But watch out for Jehovah's lightning bolts! Satanic and action-packed. (Goes somewhat berserk on speedy Power Macs.)

(182 k)
Send filthy email without the Cop Computer's catching on! Converts "bad" words in your text into the names of Senators who supported the Exon bill.

This elaborate exercise in empowerment is somewhat akin to PacMan. You steer your dick through a maze of occult, SubGenius and pop obstacles, seeking satisfaction, avoiding cops and mothers-in-law. When you "score" you are... rewarded... with... eh... PLEASURES... beyond... eh eh... MEASURE... AHHHHH!!!

You'll squirm in embarrassment or else in your chafing pants when you hear the grunts and groans of love oozing from your Mac's speakers.

Robert Carr is an evil man. A bad man. This is all-out FILTH. Praise Fuckin' Dobbs. (See Stang's article for more in the Robert Carr Collection.)
Persons interested in this sort of SMUT should check out the LAMPREY SYSTEMS WEBSITE, or send an e-mail to smurfboy@aol.com or lamprey@micron.net
If you are unable to receive files at your InterNet address, this reprehensible material is available on Private Idaho BBS (208-338-9227).

And from the workshop of the mighty Rev. Dr. "Dad" Townsend: 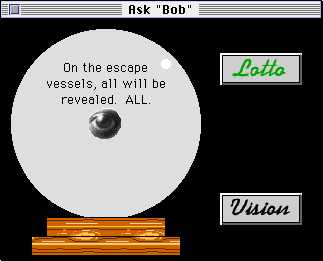 (215 k)
This amazing oracle provides prognostic answers to ANY question, AND picks you winning Lotto numbers! Many SubGenii consult this every night before they go to bed... inspires weird dreams. Better, more accurate than the I-Ching.

(165 k)
An AFTER DARK screensaver add-on. Pithy quotes from J.R. "Bob" Dobbs and hundreds of his followers will spew out across your screen whenever you fall asleep. Fully customizeable. Drop this one into your Slack Savers folder in your After Dark Files in your Control Panels Folder in your System folder in your... you know.

(132 k)
A freeware game in which you have a nice choice of weapons with which to maim or kill either Barney or a PICT pic of the Short Duration Personal Savior of your choice.

(132 k)
Sadistic freeware game that allows you to PLAY GOD and torture thousands of tiny little humans on your screen with a wide range of DISASTERS. Excellent for blowing off steam. (Doesn't run on Power Mac but does fine on previous models.) Courtesy of Brother Cleve.

(text game -- "works" on PCs!) (33 k)
From the Terror Australis Clench, this text game doesn't require any fancy gear, although you may want to download the map artwork from them.

DOS, MAC or UNIX! ANY PLATFORM! (550k)
A program that assembles real objects OUTSIDE your computer: on your desk, tabletop, or (ahem) bed. This one takes a LONG time to download, but it's worth it! A preview of things to "come" on X-Day!!

(845 K) Windows or Mac
Your connection to the AETHERIC information highway! Download Gramp's aura, Winston Churchill's, Hitler's! Give your computer a dead person's "soul"! Use it to summon dark forces! 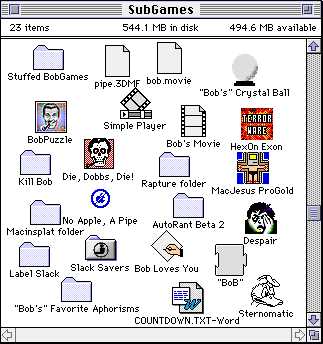 As you can see, so far we sport here mostly Mac doohickies, dingleberries and death-games. (Exactly the opposite of a Conspiracy software store, come to think of it!) BUT SAY -- do you have a DOS DOBBS GAME or DESKTOP GIMMICK that you'd like to provide for your fellow Yeti to download?

IF SO, you can now email PC games and gimmicks (smaller than 1.5 mb) directly to Jesus's account here at the Dallas H.Q.:
slack@subgenius.com

If it's a Macintosh gizmo, smaller than 2 megs, email it (Stuffed, PLEASE!) to Rev. Ivan Stang at i.stang@subgenius.com.

If your app if OVER 2 mb, email us for the special secret ftp uploads address.