SOMETHING NEW TO DIE FOR:

YOUR 5 MINUTES OF DEATHLESS FAME, ASSURED -- via YOUR "DEATH"!!!

Remember what great p.r. the Heaven's Gate cult got when they offed themselves like a bunch of crackpot loser dumb-asses? People flocked to their website to read their rants; CNN and similar Con Media ran clips from their "suicide video" in numerous "How Did It Happen In America" specials.

All those doofy Heaven's Gaters sat in front of a video camera to make their "Final Testaments" -- basically just explaining to whoever might be watching (family or the public) that they weren't crazy, or brainwashed, that they were killing themselves of their own free will... because they sincerely believed -- nay, KNEW -- that the Space Brothers would intercept their souls and make them immortal, etc. etc. It's actually a rather poignant bunch of clips, because they DON'T seem especially crazy -- in fact, the Heaven's Gaters sound somewhat more on-the-ball than most street Normals that you'd meet or work with. (I dunno quite what THAT says about Pink society!)

It almost goes without saying that those people were just SUPERSTITIOUS RELIGIOUS NUTS, whereas WE have no intention of killing ourselves on X-Day; we won't HAVE to. However, we WILL be leaving Mother Earth, and most of us will leave behind distraught family members -- who, if they survive the first few weeks, will be left wondering what happened to us or, better, HOW THE HELL WE ESCAPED THE END OF THE WORLD when THEY DIDN'T. (For a superb glimpse at the post-X-Day world for the unsaved, read IrRev. Friday Jones' short story, X-Dayversions.)

Make a 5 minute (or less) videotape of yourself (and/or your fellow clench members) explaining why you are leaving and why no one should pity you, you pity THEM, etc. etc.... we'll leave your personal vision of X-Day to you to expound upon.

If you don't have a video camera, get a friend to record you and then send your tape to us at "BOB," PO Box 140306, Dallas TX 75214. It can be VHS, Video-8, or S-8. (No Betamax, 3/4", or digital, please! Do NOT try to get fancy by sending an AVI, MPEG or QT file! They will not even be downloaded.). Try not to make it too dark and shaky and muddy looking. "SLP" mode is NOT recommended. A plain VHS tape recorded at standard SP speed would be jim-dandy.

All the farewell videos that we have collected will be assembled into one reel and shown at devivals up to and including X-Day. We will plan to show the complete set to the assembled Subs at the big final Brushwood X-Day gathering on July 3 or 4. This is why we urge you to keep it under 5 minutes. If you make it longer than that, I'll chop it down to an excerpt. It would be great if you also sent a letter that states that The SubGenius Foundation is free to use your image from this tape however we please. There are a couple of news/documentary film groups who are tentatively planning to make documentaries about the Church -- centered around the X-Day event in NY -- so your footage might someday end up being projected on post-Apocalypse movie screens a la the "drive-ins" of A BOY AND HIS DOG and the more recent bomb, THE POSTMAN.

Actually, in practice it'll probably be more like the cave-painting puppet show enacted by the feral children in the movie MAD MAX -- BEYOND THUNDERDOME. And, if we're gonna be honest about it, after X-Day (at least for the first few months, for the survivors) it'll be somehat easier to project an old fashioned 16mm film than to playback a videotape. A film projector only requires a simple motor and a light bulb, whereas video involves complex electronics that'll probably be rendered useless on 7-5-98 by massive electromagnetic pulses. 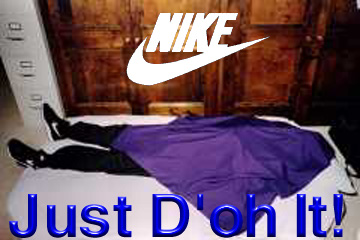