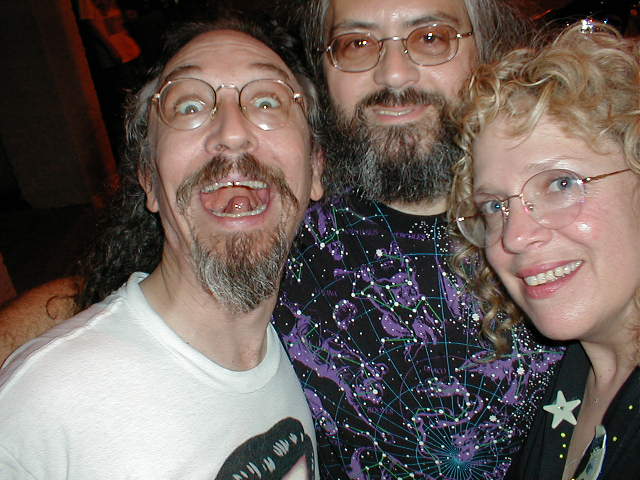 NEW: PHOTOS of STEVE'S INCREDIBLE MUSEUM OF WEIRDNESS before he died, and

PHOTOS OF THE ESTATE AUCTION, including what we were lucky enough to preserve at the Cleveland Heights MegaFisTemple Lodge Church Headquarters.

Friday morning, June 11, about 1:30 am, our friend Steve Chekey was killed in a car accident on the highway. A truck driver pulled out of a side-road in front of his car suddenly. I wish I could say he was killed instantly. He was 9 hours in a trauma unit before he died. The truck driver has been charged with vehicular manslaughter.

Steve never posted on alt.slack and most of you probably didn't know him. However, he attended pretty much every SubGenius event in Ohio or NY in the last 10 years; his photography of them has graced our website, and he is about the ONLY person besides Toth Wilder who not only videotaped our shows BUT MAILED ME THE VIDEOTAPE AFTERWARDS. In fact, for the next couple of months, I'm going to be editing footage of Starwood and X-Day, and except for what Wei, Philo and I shot, the only other footage I have is what Steve shot. There are always a dozen video cameras running at these things -- out of all those people, Steve Chekey was the one who shared.

But here's the thing. Steve wasn't just at every SubGenius and ACE event. He must have been EVERYWHERE, at EVERY nutty or interesting event for hundreds of miles around. He had whole other huge circles of friends, in the ham radio world, in the antiques-collecting world, the kitch-collecting world, and the computer-geek world. This was a guy who DID NOT SIT ON HIS ASS waiting for things to happen or some show to come on TV. It is not surprising that he'd get killed on a highway late at night. He lived way out in the small town of Litchfield and drove all over the country from there, gathering cool info, collectables, and experiences.

Wei and I realized last night how much of Steve is around our house, from goofy gizmos to a big bag of Scripture Candy. Any time I edit X-Day stuff or old pics I'm working with Steve's things.

Steve was a long-time member of The Chameleon Club, the core group that runs ACE and Starwood and all that -- and he was one of the ones who actually DID stuff. In fact he did stuff all the time. What he didn't do was cause trouble, get in your face, be bossy, be an embarrassing drunk, or even do any pointless schmoozing. He was a very polite and quiet fellow who instead was always making sure the recorders were running and the tapes were LABELED afterwards. (As one small for-instance.) He was always around for the NOT-SO-FUN parts of festival-running that are the MOST necessary but the least ego-gratifying -- loading and unloading, driving, assembling, delivering -- physically making things happen in the real world, rather than the bullshit hot-air world.

Why STEVE???!?!? That's the horrible unanswerable question. Of all people, with so many arrogant fuckwads and lazy whiners that we could STAND to lose, why does WOTAN decide to snatch up the USEFUL, FRIENDLY, SKILLED, GENEROUS guy?

I don't think I ever saw Steve show up at a party without a big bag of EXTRA FOOD AND DRINK for everybody. Unrequested and unadvertised.

He was just always there, and always cool. I considered him one of my best pals in the ACE group, and certainly one of the only ones with whom I shared any geek proclivities and hardware fetishes. He was also interested in weird events and groups of all kinds, and every time I saw him, he'd hand me some little collection of insane flyers or brochures, or website print-outs, from somebody weird. Usually somebody weird that he had just VISITED.

A couple of years ago, Steve had a party at his house out in the country. It was a farmhouse... completely filled to the brim with COOL CRAZY STUFF (especially antique medical quack machinery). The YARD was likewise filled, and outside were TWO WAREHOUSES, further crammed. Also lots of animals like roosters and racoons and geese. I posted a whole bunch of PHOTOS to a.b.s. back then of this house, without saying WHOSE house it was. ('Cause it was so packed with great stuff, I didn't want assholes knowing where to go and STEAL any of it.) 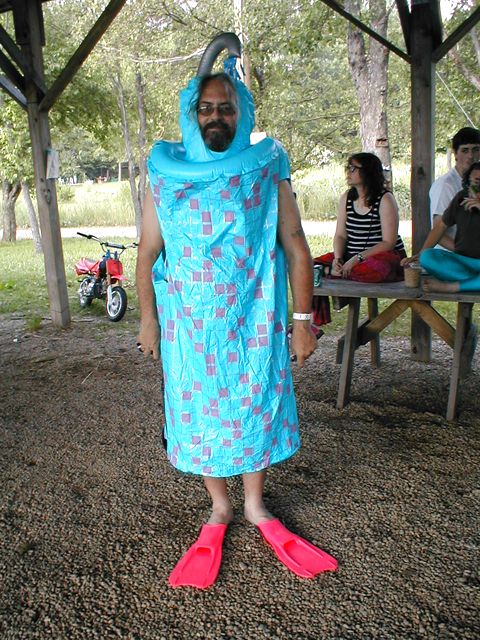 In his day job, from which he retired last year, Steve worked with mentally retarded kids.

The only thing I can figure is that God needed somebody cool to take care of the retarded angels, and also who will always remember to make sure the Akashic tapes are properly recorded and labeled.

Somebody God could talk to, who wouldn't always be WANTING something... just the opposite, in fact.

Maybe Akbar was right. Maybe "God IS the only one who is lucky and can kill anyone he wants."

Now I am crying.