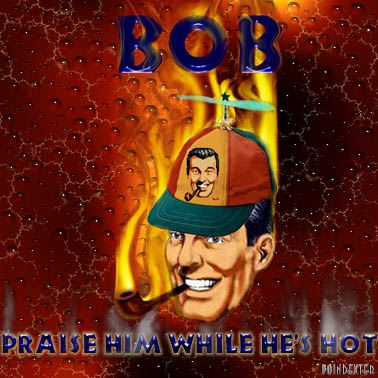 Dumpings from The Stangostomy Bag

By Rev. Ivan Stang
in a big damn hurry


GREETINGS IN THE NAME OF DOBBS YOU SINNER THERE!!!

Welcome to the Fold... the great "fold" between time and space whence emanates the SMOKE from "BOB'S" PIPE, and, on rare occasions, the stench of his burning flesh -- and even more frequently, ours. For just as Dobbs replenisheth us with Slack in abundance, so too is he a harsh taskmaster for those of us who wear his YOKE.
(Incidentally, that image in the upper left there is a GIFMovie. If you have Netscape 2.0, it will first load gradually, in slow motion. If you let its full 194k soak into your machine's brain, it will start looping at high speed just as if you were watching a tiny, cruddy TV. THEN, go to the BOTTOM of this page to see it in its fulsome GLORY!)

MOST IMPORTANT NEWS:
WE NOW TAKE PLASTIC.
It's TRUE: you can now email, mail, fax or phone in your Hate Offerings for Churchly Goods using ANY CREDIT CARD! See the SCATALOG for EVERY DETAIL! 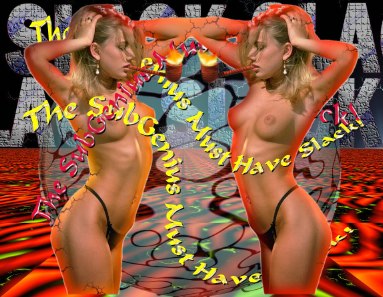 Watch THE EARS OF DOBBS for major changes in SUBGENIUS AUDIO SPEW -- even VISUAL changes! We've just updated our art pages -- AGAIN -- as well as the HOUR OF SLACK shows and our WEBSITES OF THE GODS links. We've installed new SubGenius games and apps, a special IRC section, rendered Media Barrages 5 and 10 in TrueSpeech, heaps of old new art and sounds, and JANOR, plus new articles and rants from the BEST of ALT.SLACK. The easiest way to access it is through the updates page.

(Most of the below is relatively old news, but makes for a good overall view of this website for newcomers.)

Only a HUMAN would pass up our multimedia, nudity-impacted, RealAudio-punctuated report on the 1997 X-DAY DRILL, the most perverted SubGenius event since THE 1996 X-DAY DRILL!!

SEEK the TRUTH about the new Sunday Night IRC "Internet Chat" Church Devivals, and the first of more Slack to come on AOL! Learn how to get The SubGenius Digest by email!

ALL of the main fancy-schmancy sections of this website have swollen gigantically, especially THE ART MINES (where we had to start a whole new tunnel to keep up with the STUPEFYING INFLUX of SENSE-INVERTING, MODEM-MELTING GRAPHICS! (INCLUDING MAGIC FIRST GENERATION DOBBSHEADS!)

We have HALVED THE SIZES but DOUBLED the NUMBERS of downloadable SOUNDS in the EARS area -- now also in TrueSpeech for INSTANT SATISFACTION!! We NUKED all the VIDEO! BAFFLING and SPECTACULAR new GAMES and DINGLEBERRIES have split the Funhouse into three massive sections. And you will puke your GUTS out when you see how pregnant has become WEBSITES of the GODS!

The PORTRAIT GALLERY, inexplicably one of our most popular sections, may now tell you TOO MUCH about your fellow SubGenii, and THE HALL OF GOODS now bears not only our own ever-improving catalog, but 'ZINE REVIEWS from our cohorts at the Holy Temple of Mass Consumption.

NEW STUFF UP on The HOLY CHURCH RADIO SHOW -- newly excerpted and TrueSpeechized weekly for your LISTENING PLEASURE in real time over the Web:
THE HOUR OF SLACK

. You can still hear oldie episodes from the other SubGenius Radio website, Ultraplex.

An ENTIRE SUBGENIUS BOOK beautifully webberized for your edification:
3-FISTED TALES OF 'BOB'
and other SUBGENIUS CLASSICS
-- wherein you'll find amazing illustrated color WEB VERSIONS of such beloved old holy texts as SubGenius Pamphlet #1, THE BOOK OF THE SUBGENIUS, PRESCRIPTURES and others, plus the most scalp-peeling RANTS of all time!! (Don't miss the new illustrated version of Michael Peppe's classic tirade, AD!)

JESUS IS HERE!
Yes, the Lord Jesus Christ has risen from the grave and is now working for The SubGenius Foundation! His first miracles involve our well-meant but oft-cursed Mail Order Department. You may NOW order the sacred SubGenius Crap you've always wanted for FAST DELIVERY using credit cards... online or off! Jesus has been wheeling and dealing with all our suppliers, laying hands on our printers, retooling our drill-presses and whipping our Bombies into shape. Stay tuned for wallet-breaking details!

Did the Slack Crusade pave its swath of horror and holiness through YOUR town?? SEE lifelike SubGenius preachers and bands in their NATURAL ENVIRONMENT, JUST as they ACTUALLY LIVED, MILLIONS OF YEARS AGO!!

If you want to know more about what's been happening at The SubGenius Foundation, Inc., Dallas headquarters of the DobbsCo empire, there's way more excruciating detail than you'd probably ever want to know in Rev. Stang's Internet Diary, a compilation of the newsy updates and reports that I, Stang, post on alt.slack in order to be friendly and keep the email bees off our backs. I would recommend this only to experienced SubGenius fanatics who hanker to know every tedious detail of life and chores at the central Throne Office, and why there hasn't been a printed STARK FIST (see below).

Unbelieveable but true, there's a happy ending to PAUL MAVRIDES' battle with the California State Tax Board. They picked the wrong cartoonist to conspire against. If he had lost, half the cartoonists in California would eventually have been put out of business, you'd be paying more for any illustrated book you purchased, and the First Amendment would have been deflated by another few thousand pounds of Slack per square brain cell. YOU OWE HIM.

The last time you were here, the fearsome SubGenius preacher Dr. Legume had died. He's back with a vengeance. Many are sorry. Even if you've never heard of him, we're sure you'll find our new illustrated report on his unexpected resurrection quite maddening. (See THE RESURRECTION OF DR. LEGUME) Or, if you weren't sad about his death to begin with, GET SAD FIRST with the old Legume Memorial section, a RIVETING portrait of a great SubGenius, and yet a TOTAL TRAVESTY, a SICK SICK MOCKERY of his memory.

We survived the GWAR tour and all we got were these 10,000 crummy unsold Dobbs T-shirts... and a hell of a lot of pictures, videos and TALES TO TELL.

Most CONSTANT and INTERMINABLE news, so ancient that it isn't news at all, is that we're STILL WORKING on the Stark Fist of Removal Church magazine. (That's a moot point to you on the Web, as there are about 50 new issues' worth right here, in full living color and stereo sound.) AND the REAL SubGenius CD (with Negativland). AND the promised CD-Rom project. AND the new Dobbsface cosmetic surgery.

OLDEST news is that we did finish the fourth and greatest SubGenius commercial book for Simon & Schuster, REVELATION X, we produced over 547 Hour of Slack radio shows, saved thousands of souls (now stored in Dobbs' basement), learned how to operate AND REPAIR these primitive human computers, prevented three earthquakes, got on national TV and The Washington Post, released a dozen major new products including coffee mugs, fridge magnets, cloissone pins, gimme caps, guillotines, and a whole line of SubGeniusWear; staged about 30 successful Devivals everywhere BUT Dallas, weeded out a few hundred of the more obnoxious Bobbies, stayed in business(!), took over about half of the Internet, preserved the best of alt.slack right here in these pages, prevented 11 attempted assassinations of "Bob,"

If you don't know much about "this "Bob" thing" and ACTUALLY BELIEVE that you want to know more, DON'T SAY WE DIDN'T WARN YOU!!! -- but you should probably start at FREE SLACK FOR SALE, the fully illustrated online version of our famous Pamphlet #2. WARNING: It's 23 pages long and every other word is a link to something absurdly appropriate elsewhere on the Web. BUT DON'T FOLLOW THOSE LINKS YET or you'll be LOST FOREVER. (We're working on a program that'll SNAP YOU BACK HERE if you wander too far away.)

Or, if you'd like to see how SubGenius Ministers at large have attempted to explain this thing to newcomers "by the seats of their pants," see the FAQs collection from alt.slack.

Kook-watchers, crackpotologists, conspiracy buffs and abusers of the book High Weirdness by Mail will drool over the updates in both KOOK LOVE and KOOK HATE. SEND IN YOUR KOOK REPORTS!! Old-time SUbGenii may want to go straight to the more esoteric anti-conspiracy ARTICLES and RANTS.

If you're just a junkie for eye-burning visuals, twisted audio experiments, Internet Pornography, downloadable games, etc., we got those too. (NOTE: There are many NEW games in the FUNHOUSE since November, including MORE works of the great ROBERT CARR!)

Or maybe you just want to know what you'll get for that money we're about to hypnotize you into sending us. EVERYTHING YOU WANT TO BUY is in THE PRICE LIST OF THE GODS.

If, while viewing this material, you alternately feel like you're nearing The Truth, being made fun of, and getting a headache, YOU'RE ON THE RIGHT TRACK.

While we're at it, HELL, let's go ahead and throw in MISCELLANEOUS NEW ARTICLES, RANTS and FACE-POUNDING YUKS that just came in recently, and have not yet been safely categorized and tucked away neatly in their own little coffins in this vast web graveyard.

And OH YEAH before I forget, here's the most recent update of THE ONLINE SUBGENIUS PAMPHLET #1 that's been going around the Internet for about 10 years now.

You say you've written three new anthologies of hilarious short stories starring you and Dobbs? And created 15 3-gig X-Day paintings in Photoshop? You can send them here, but if you don't want to wait for weeks for a response, put 'em up on the slave block at the newsgroup alt.slack and see who buys 'em. (That's where I do MY shopping.) And there's always alt.binaries.slack for your pictures and sounds.

Speaking of WHICH -- see the New Website section (further down on this page) for a link to Modemac's new website, THE SUBGENIUS MEDIA ARCHIVE. Therein is stored not media BY the Church, but ABOUT the Church BY the CONSPIRACY! (Read all about it.)

Many eager SubGenii have said to me, "Rev. Stang! Let me help you redesign those pages! I'm an html-in' FOOL!" Well, HAVE AT IT. Try any article or section past the main "HALL OF..." index pages. Most of it is REAL PLAIN LOOKING still. The Other Mutants sections might be good for experimenting on. (It's been sorely ignored so far) Pick a section that hasn't been done up all fancy yet. View the source code as text. Save that. DO WHATEVER THE HELL YOU WANT WITH IT. Then email that revised source to Dallas so the staff here can look at it and decide whether it's WORTHY of the GREATEST WEBSITE ON EARTH!!!!

In the next few minutes we shall whup up the proposals for the CD-ROM, the CD-audios, the movie, the alt.slack BOOK, the 3-FISTED reprint, ETC., so we can get those shows on the road and some income happening, AND THE STARK FIST in print, AIEEE KREEGAH BUNDOLO WE SHALL PREVAIL against ALL ODDS, or, at worst, we shall PRETEND TO!!!

Meanwhile, CHECK THE SCATALOG, it now has new product WITH ILLUSTRATIONS of the new CDs, the Dobbshead cloisonne pins, the mugs, the MAGNETS, the shirts, GO FOR IT ALL!!!

You may now download a PERSONAL VIDEO MESSAGE TO YOU FROM ME. It's an mpeg video. You need to also download the soundtrack wave.file, or it will be a silent movie.

And always remember, kids: the Graven Image of J.R. "Bob" Dobbs is a trademark of The SubGenius Foundation, Inc., and we wouldn't harp on it except that THAT TRADEMARK is the only thing that keeps this Church out of the hands of the Anti"Bob" and the Pinks.

ALMOST FORGOT! -- Check out the
 BRAND NEW SUBGENIUS and BULLDADA WEBSITES
in Websites of the Gods!